Two scary things happened to me on Friday morning. Before I go any further, I want to be clear that I don’t mean life-threateningly, earth-shatteringly scary, more like ‘public speaking’ scary. The second scary experience happened about one hour in to a three-hour drive.  I had my radio cranked up, cruise control set and a glorious amount of windshield time before I arrived at my very first SCWBI Regional conference.  What else do you need on a Friday morning? I can tell you what you don’t need… TRAFFIC. Bumper to bumper traffic, and the kicker? The traffic crawled to a stop about a mile before the tallest bridge in the entire world! Okay. So, it’s not actually the tallest in the world, but for me it’s the stuff that nightmares are made of.  Fun fact, I have a strong distaste for anything that takes me higher than a step stool. I find heights to be disorienting, distracting and incredibly disconcerting.  The bridge in question was going to get me across the Mighty Mississippi. There’s no way around it, under it, or through it… only over. Believe it or not, I had never been stuck in traffic on the Mississippi River bridge but just the thought of it has caused a healthy amount of anxiety. What if I roll backwards? What if people are speeding past me and I’m stuck with the bridge bouncing beneath me?!? What if my car gets a mind of its own and drives itself over the side without warning? Right, all very rational concerns.  So, there I was with a solid fifteen minutes to stare straight at the brake lights inching up the bridge and psych myself up for what was about to happen.

Pause.  Let’s rewind about four hours to the quiet moments after I dropped my kids off at school. I came home to pack, print out query letters and hit the road. Everything was just as I planned it, except I was on the verge of tears.  The conference that had been beckoning me for months had finally arrived and I felt distressed. It wasn’t about leaving my family, my husband had things well under control and my kids were excited I was going. It wasn’t the road trip. It wasn’t the cost of the conference or about missing work. For a moment I wasn’t sure what it was, but it was very real and spreading fast. Thankfully, I’m a pretty self-aware girl, not to mention I’m a nurse, so self-diagnosing is kind of my ‘thing.’  It didn’t take me long to realize that I was riddled with a terrible case of insecurity, maybe even my first touch of the imposter syndrome I’ve heard so much about.  My lack of formal training, poor grasp of grammar and countless technical short-comings haunt me on a daily writing basis. Those things are easy enough to hide when I’m in the privacy of my home and I was about to leave the comfort of my hiding spot behind.  I was momentarily frozen with fear that I would be sniffed out as a fraud during the conference.  That I would be overpowered by intelligent conversation and blown away by the skill and success of the writers around me that I would run home on Sunday with my tail between my legs.

You’ll be happy to know that neither the bridge, nor the worry got the best of me.  When I was crawling towards the bridge I thought back to the tears that fell and the conversation that ensued.  I realized that this was only the beginning.  Hopefully, the beginning of a long and illustrious writing career. More likely than that, though, is that this was the beginning of really believing in myself.  It’s one thing to ‘talk shop’ hidden behind a computer screen, but it’s a whole different ball game when you’re doing it in person.  I was putting myself ‘in the arena’ in a very new and real way.  Just like I was going to have to suck it up and cross the Mississippi River bridge at a sails pace, trusting that I wouldn’t get smashed, or bashed or splashed, I was also going to have to find a way to pump the brakes on my pity-party before it was too late. I know I belong there. I belong there just as much as you belong there and you belong there just as much as the writer across the table from you, and the one sitting behind her, and they one sitting behind him.  We all belong there! I had a conversation with myself at the bottom of the bridge, remembering that there are always two camps, spinning their own version of the same story.  I could continue listen to the self-depreciating, self-doubting, self-conscious version, or I could choose differently for myself, at least for a weekend. So, that’s what I did and I let the bridge help me do the work.  I decided that when I reached the very top I would look to the left and down at the river down below.  (I NEVER look over the side!) Sure, there were trucks driving past, cars switching lanes and the bridge was wobbling more than I care to discuss. But in that moment, looking out on the Mississippi River, I was okay! I let go of my worry and allowed myself the glorious opportunity to embrace 72 hours of full-time writer-mode.  That’s all I really needed, anyway, to just be me and tell the stories that I have to tell.

The Society of Children’s Book Writers & Illustrators is a gracious, warm and welcoming group of people who are driven by a passion for telling stories aimed at a young audience.  The group of individuals gathered in New Orleans this weekend was no different. I reconnected with old friends & made a few new ones.  I soaked up the information that was given out like a sponge and I ate INCREDIBLY well. I laughed a lot, jotted down notes and had a query letter critiqued. I know that I said that I was trying to write more pointed picture book information here and ramble a little less, but I also said I wasn’t making any promises.  I figured if it happened to me, then maybe it happened to you and if was important to me, it may be an important conversation for you, too.  Whenever your self-doubt creeps in, please know, for what it’s worth, that I don’t buy it.  I’ll be your cheerleader! After all, the greatest gifts we can give each other are support and encouragement, regardless of where you fall on the spectrum from pre- to prolifically published.

I’m still digesting so much of what I learned, but I came back encouraged, excited and inspired. Is anyone surprised? Of course not! That’s what happens when you surround yourself with like minded people.  That’s the beauty of talking shop and sharing stories with people who know EXACTLY WHAT YOU’RE TALKING ABOUT. In BIG MAGIC, Elizabeth Gilbert talks about making room for our fear. Instead of fighting it, she suggests we invite it along for the ride but insist that it sit quietly and doesn’t get a voice in any major decisions. Well, insecurity is just fear in a costume, right?  Right.  So, it can’ come along, but I’m banishing it to the back seat, locking the windows so it doesn’t get sneaky and going to keep blaring music and crossing bridges.

Would you look at that? I’m 1200 words into this post! I don’t mean to be rude, but would you mind showing yourself out? I have a stack of revisions calling my name.

Thanks for reading, come back anytime!

3 thoughts on “The bridge.” 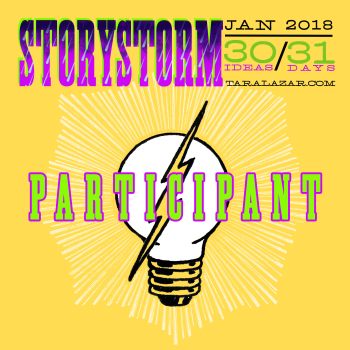 As a wife, mother and aspiring author, I dream of seeing my words on the pages of a beloved picture book. My mission is to learn as much as I can so that my journey from 'aspiring to published' will be a fruitful one.